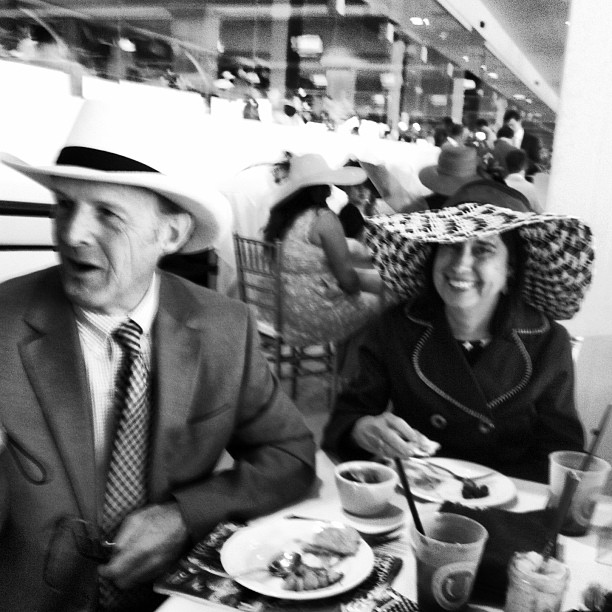 Derby Weekend. Stew and Midge’s lifelong goal to see the Kentucky Derby in person was coming true. They went as guests of Midge’s brother Kix. He’s an old hand at it. But first they enjoyed a night in Nashville and a Kix concert there. Former STV employee Kix Brooks is always in gear, something always going on. It was a gorgeous spring evening, and he said Stew could pick what they drove to the concert an hour away. Yellow classic 1958 Corvette convertible or shiny red Ferrari? Sorry, Ferrari, the Corvette’s top was down – they were going American and were gone. Man, what a ride: new mown fields, cattle grazing. Too fun. The next day they took Kix’s big tour bus to Louisville, arriving about noon. Kix had a concert gig downtown in the evening, and Midge and Stew were backstage in the control booth right in the thick of it. And then the fun really began in earnest because that’s when they turned their lives over to Officer Pam. Louisville Police assign celebrities their own policemen/women. They take their charges wherever they want, whenever they want for as long as they want. Kix, Stew and Midge wanted to get to the hottest ticket in town, the Barnstable-Brown Gala – and Pam did it. It was the most over-the-top party anyone could imagine. In a swank residential part of town, very high and hilly — a Gatsby-esque mansion tricked out into party central. Tents and stages covered the back yard, security and red carpet in the front. Maseratis on display outdoors. Crazy stuff. Beautifully done. Stew and Midge stayed close to Kix and went VIP right up the hill, and people waited on them immediately. Bringing plates of food and freshening their ice buckets. Every table was basically its own bar, with liter-sized bottles of Grey Goose etc. Stew and Midge started eating at about 11 p.m. Their servers didn’t care. The Vreelands could have started at 2 a.m. and it would have been fine with everyone there. Guests were given their choice of funky fedoras on the way in. At some point a tall, polite guy asked Stew if he could borrow Stew’s hat for a while. He had a famous friend who was getting his picture taken and was having a bad hair day. Stew said sure. He saw the guy but didn’t recognize him. When his handler gave the hat back he said his friend was one of the Patriots. Later the penny dropped that it was Julian Edelman. Heck, if Stew had known, Edelman could have kept the hat. Tom Brady was there, Stew found out later, but didn’t see him.

After watching Travis Tritt, Miranda Lambert, Smokey Robinson and Kid Rock, Kix did an amazing set that included Mustang Sally. Stew snagged this video of it/the party with his brava little Sony. Pam got them all back to hotel about 2 a.m. The next day Midge, Stew, Kix and his wife Barbara put on their Derby party hats and were off to the races, from about noon to 9 p.m. Rainy outside for the horses, but party time inside where they sat with Terry O’Quinn (from Lost), and ran into the likes of Miranda Lambert and Aaron Rodgers. Their table was right on the finish line, and always replenished with great food. Julep cups overflowed. See Stew’s walk-thru video for a sense of the moment. The Derby race was the 11th of the day so there would be races, time to eat, bet, chat, walk around, see people, and race. Lovely, buzzy, busy, laid back day.

Nope, their horses didn’t win. But they’d still have to call it a perfect dream come true kind of day.