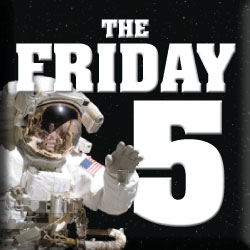 Our post about the use of social media in outer space by astronaut Chris Hadfield got some gears turning here at Vreeland HQ. From campaigns to branding home runs, space has been a recurring feature in advertising for years. Here’s a look at five effective forms of advertising or branding that have some kind of space theme.

Red Bull Stratos – This campaign from Red Bull was truly out of this world. Over 8 million people watched live on YouTube as Felix Baumgartener set the world record for the highest free fall jump to Earth. Red Bull did a good job making sure that nearly every camera angle featured at least one company logo. The event was covered by media from all over the world, and with the exception of a delay, was executed flawlessly. It’s not easy to put a dollar amount to this kind of exposure.

Spock vs. Spock – The 2013 Star Trek movie, Into Darkness, had a lot of cross over ads, but this pairing with Audi was the most viewed on YouTube and the most shared across all social platforms. This viral video wasn’t made for TV, doesn’t take place in outer space, and features the two actors that have portrayed Spock on the big screen (Leonard Nimoy and Zachary Quinto) racing each other to see who can get to a golf course first. The end result was nearly 6 million views and countless water cooler conversations for sci-fi fans everywhere.

Angry Birds Space – Angry Birds is an interesting phenomenon because nearly everything about it is for sale. What started off as a clever and fun iPhone game quickly turned into a full-blown entertainment company. What sets this venture apart was the amount of detail the company went to in order to be accurate in its portrayal of space. They contacted NASA officials and had engineers develop in game gravity simulators that were surprisingly advanced. This set the stage for what is one of the best crossovers in the gaming/entertainment industry, with the massively successful Angry Birds: Star Wars game that launched in 2012.

Volkswagen Vader – Speaking of Star Wars, this Volkswagen commercial isn’t set in space, but it was one of the better-received spots from the 2012 Super Bowl. It features a young boy dressed as Darth Vader attempting to use the force around the house. He finally manages to make it work when he gets to the driveway… with a little help from dad.

Kia Origins – Kia took storytelling to an interesting place in this commercial produced for the 2013 Super Bowl . Beginning and ending in a car, a young boy poses the question, “where do babies come from?” to his father. Dad gets pretty creative with his storytelling in his attempt to answer, and the imagery that accompanies it keeps up with his clever narrative.

Think we’ve missed one that deserves a mention? Hit us up on Facebook or Twitter and let us know!